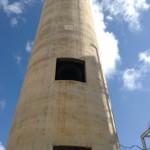 En-Sure was engaged by General Smontaggi, the main contractor responsible for the decommissioning and dismantling works at the Delimara Power Station, to oversee the health and safety of the workers employed during this decommissioning Project.

The dismantling work, which started in September 2017, consists of the dismantling of the 150 metre chimney, two boilers, two turbines, several HFO pipelines and auxiliary installations. The dismantling process started with the removal of the lowermost part of the two steel pipes that connected the chimney to the boilers. The remaining metal pipes, ladders and platforms within the chimney’s structure will be lowered to ground level using strand jacks. These will be subsequently dismantled and broken into smaller pieces before being carted away off-site.

This Project is being given substantial media coverage since the method that will be used to dismantle the chimney stack has never been used locally. An auto-lifting platform will be erected on five steel columns rising to the topmost part of the structure outside the chimney’s concrete walls. Once the chimney has been emptied internally, remote-controlled demolition robots on top of the platform will start pulling down the topmost concrete walls at 1.5 metre intervals and the platform lowered every 1.5 metres to be able to proceed with demolition. When the height of the chimney is lowered up to 35 metres above the ground, the remaining concrete walls will be demolished by means of a high reach excavator.

En-Sure health and safety staff monitor the works on site in order to ensure that the health and safety control measures are followed at all times. Our staff also ensures that workers are made aware of the health and safety requirements specific to the Site through induction training session and toolbox talks. Weekly and ad hoc reports are also sent to the Client and the Contractor with the aim of highlighting observations made on site during the monitoring and providing guidance on improving site practices.