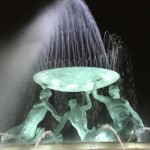 The Tritons Fountain was recently inaugurated after a lengthy restoration process in preparation for Valletta 2018. This project forms part of the embellishment and pedestrianisation of the Triton Fountain Square, and is part of the larger regeneration of the entrance to Valletta, itself a site of significant historic importance and a World Heritage City.

En-Sure was commissioned by the Grand Harbour Regeneration Corporation to carry out archaeological monitoring for the duration of the project, which started with preliminary investigations in September 2016. En-Sure’s team of archaeologists, led by Lead Archaeologist Chantal Cassar, made important archaeological discoveries, uncovering several defensive walls mainly dating to the Knights period. Elements dating to the British era were also uncovered. These were notified to the Superintendence of Cultural Heritage, to ensure that all features are recorded and studied. Some of the discoveries were also reported in the local press.

Moving forward, En-sure’s archaeologists, together with the Superintendence of Cultural Heritage, are aiming to carry out an in-depth study of this area in order to understand the mechanisms that led to the survival of the archaeological features unearthed during this project.